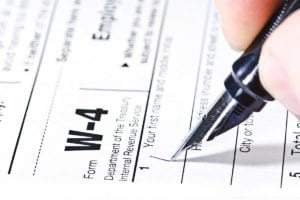 As expected, the IRS has published a draft of a radically revised Form W-4, Employee’s Withholding Allowance Certificate. The agency emphasizes this is just a preliminary version, and until further notice, everyone should continue to use the current version. However, human resources departments and payroll managers should take a good look at it now, as it’s likely the final version will be similar.

According to the IRS, “The redesigned Form W-4 no longer uses the concept of withholding allowances, which was previously tied to the amount of the personal exemption. Due to changes in the law, personal exemptions are currently not a central feature of the tax code.”

A FAQ list explains that the form is divided into five steps, but only two steps are required: the first, where you enter personal information like your name and filing status, and the last, where you sign. Step 2 lets workers account for multi-job households, Step 3 covers dependents, and Step 4 addresses other adjustments, such as other income and deductions. Worksheets help employees figure out the right answers for various steps. Employees who fill out only Step 1 and Step 5 will have their withholding computed based on their filing status’s standard deduction and tax rates, with no other adjustments.

Companies may not have to face an overwhelming amount of new paperwork once the form is finalized. According to the IRS, “Employees who have submitted Form W-4 in any year before 2020 are not required to submit a new form merely because of the redesign. Employers will continue to compute withholding based on the information from the employee’s most recently submitted Form W-4.” However, employees hired after 2019 or employees wanting to make changes after 2019 will have to use the new form. Employers will have to adjust their systems accordingly.

In a press release, the IRS says it “expects to release a near-final draft of the 2020 Form W-4 in mid-to-late July to give employers and payroll processors the tools they need to update systems before the final version of the form is released in November.” We’ll have further updates as later drafts are released. Meanwhile, employers and employees should remember that any of these provisions are subject to change.

Not sure if you’re withholding the right amount? Use the IRS Withholding Calculator to perform a Paycheck Checkup!