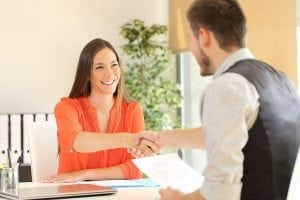 There are some job candidate questions that, if asked by HR or the hiring manager during a job interview, could put a company at risk for legal action. There are numerous state and federal antidiscrimination laws designed to ensure that employers hire based on skill, not stereotypes. Do you know what’s fair game?

Queries such as the following that reveal personal details are immediate red flags. Even if the questions themselves may be legal, the fact that you are asking them could be used as evidence of discrimination later on.

How old are you?

The Age Discrimination in Employment Act protects people over age 40 who work in companies with more than 20 employees from employment discrimination. Employers may specify an age limit for a position only in rare cases where it can be proven that age is a basis for authenticity, such as in choosing one actor over another, for instance. Many states offer protection as well. A fair question is the following: Are you the minimum age required to perform this job?

There is no reason for an employer to ask about religion or about any holidays observed. Fair points that can be brought up, however, include that weekend and holiday work is required, followed by asking the following: Would this pose any difficulties to you? Title VII of the Civil Rights Act of 1964 allows religious and sectarian educational institutions to express a religious preference when hiring.

This is an irrelevant question.

It’s illegal for an employer to ask job candidates questions about race or skin color except in very rare situation, like a modeling job. And you can’t require a candidate to submit a photo with an application. But an employment application may include a space where possible new hires voluntarily indicate race.

Interviewers cannot ask job candidates questions about whether they are U.S. citizens or where they were born, or remark on an accent. Unless a business case can be provided, a company can’t specify that English be the only language spoken on the job. But fair questions can inquire about a person’s full name and whether they’ve worked under another name, in order to check employment history. (Employers do need to verify that employees are eligible to work in the United States, with Form I-9.)

Do you have any disabilities?

Under Title 1 of the Americans with Disabilities Act, an employer may not discriminate against a qualified candidate who is disabled and must make reasonable accommodations for physically or mentally impaired employees. A fair question would be the following: Are you able to perform the basic functions of this position with or without accommodation?

Marital status is not relevant.

Do you have children or plan to?

Questions about family status are not permissible.

Are you in debt?

Questions about financial status — whether candidates own a home or have previously had wages garnished — are off-limits. If good credit is a requirement for the job, you’re within your rights to perform a credit check.

Do you drink or smoke in social settings?

There may be regulations and company policies about smoking or drinking in the office, but social behavior is an employee’s own business.

Have you ever been arrested?

Candidates are innocent until proven guilty; therefore, it’s illegal for an interviewer to ask if a candidate has ever been arrested. You can include on employment applications questions about felony convictions with a disclaimer that a conviction won’t necessarily remove the candidate from consideration, or you can follow the advice of the movement that implores “ban the box,” asking employers not to include this question on the application.

If the bold questions above are asked, they could be used as evidence of discrimination. Why would you ask these questions if they are not relevant to the job?

The portion of the federal Civil Rights Act that prohibits employment discrimination — Title VII — doesn’t have a list of questions that are impermissible in interviews, but antidiscrimination agencies often issue guidelines that should be followed.

One reason off-limits questions slip out, according to hiring managers, is that people chitchat during interviews and it’s natural to speak about things that might offer information that’s not job-related but could be used to discriminate against a person. Caution is advised.

Do you have HR Questions?

Learn more about HR on Demand